History of the RHE

The RHE was born in the whirlwind of renewal of the social sciences in the university world during the last quarter of the 19th century, and in the boom of reviews at the University of Louvain[1]. Professor and Canon Alfred Cauchie (1860-1922) was the soul of the new enterprise, beginning early in 1900. On the first Board of Editors, he enlisted the good offices of four professors from the Faculty of Theology: Paulin Ladeuze, Rene Maere, Alphonse Van Hove and Amedeus Bondroit. The 1st issue is dated April 15th, 1900. It includes a foreword by Cauchie presenting the state of the question in ecclesiastical history and the Review's orientations. We note particularly: “The Review will embrace the history of all Christian people from Jesus Christ to the present; it will deal with all manifestations of the external and internal life of the Church; finally, it will deal with various parts of the method envisaged from the viewpoint of ecclesiastical history”. And furthermore: “… the Review will always take pride in showing itself impregnated with the Catholic spirit. […] The Review will endeavour to carry out its programme according to the legitimate requirements of the methods particular to history”[2]. The Review was to be Catholic, scientific, but not ultramontane.

Alfred Cauchie, first director and founder of the Revue [3] 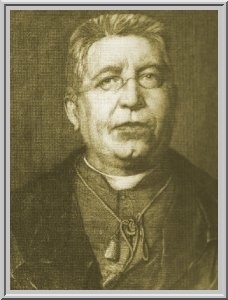 The Review published 4 issues a year of approximately 160 pages. It then contained five headings : the articles (half of the review), the selections, reviews (conceived along the lines of those in Duchesne's Bulletin critique), the chronicle and the bibliography. In 1905, the selections were incorporated under the article heading. Its sphere of activity was very broad, covering all aspects of Church history. However, Christian Antiquity and the Middle Ages occupied a more than preponderant part.

In addition to some editorial problems, the Review soon experienced some financial difficulties. If its first years of existence resulted in net earnings, the situation soon deteriorated, particularly due to a lack of subscribers (726 in 1900, and still under 800 in 1922). Because of the destruction in Leuven caused by World War One, the Review's very existence was called into question at the end of the conflict. From July 1914 to October 1919, the Revue d’histoire ecclésiastique was not published. In the course of things, the next delivery only arrived in 1921 (volume XVII) and was followed two years later by a thick update of the Bibliography under the heading volume XVI. To settle the delicate financial question, subsidies were requested from the Minister for Sciences and Arts, the University Foundation and private individuals. More subscribers were attracted and Belgian clergy support was ensured.

For writing the articles, contributors to the Review were found within the University (especially among members of the History Seminar and the Faculties of Theology and Philosophy and Letters) and also in the Catholic academic world of Belgium and abroad. But the Review's reputation among historians the world over came above all from its information section (bibliography, reviews and chronicle). The bibliography was especially of service.

In 1919, Alfred Cauchie was named director of the Belgian Historical Institute of Rome. Leon van der Essen and Albert De Meyer thus succeeded their Master. Canon De Meyer continued on with the Review's development until 1952, creating in 1926 a series of monographs, the Bibliothèque de la Revue d’histoire ecclésiastique. The bibliography progressed both in quality and quantity thanks to the contributions of Mgr Alfons Versteylen, O.Praem, and especially of the Canon Sylvère Hanssens. 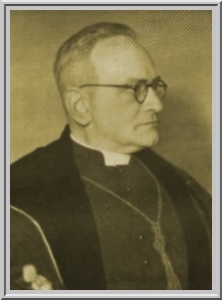 The Review continued to appear during World War Two, but the years 1944-1945 produced one volume with fewer pages. In 1952, the RHE came under the auspices of Prof Roger Aubert who ensured both its academic expansion and its financial development. A new stage was reached in 1990 with the appointment of Professor Jan Roegiers (Kuleuven) to the position of director and of Professor Claude Soetens (UCL) to that of secretary. The bibliography has been computerized since 2002, (encoded in a database) and in the months to come will be published simultaneously in a paper version and on an Internet site.

In 2000, the RHE celebrated its 100th anniversary in Louvain-La-Neuve with a one day conference (November 17th), during which two doctorates honoris causa of the Faculty of Theology were allotted to historians of great renown: Pierre Maraval (Sorbonne) and Étienne Fouilloux (Lyon 2). In their lectures, the two recipients spoke, respectively, on the Pères cappadociens, aristocrates et chrétiens and l’Intransigeance et monde moderne au 19e-20e s. A special issue of the Review was also presented there, of 800 pages (95/3-4), entitled 2000 ans d’histoire de l’Église. Bilan et perspectives historiographiques (dir. J. PIROTTE and E. LOUCHEZ) who, in 38 contributions, assessed current research in Church history. And in the 2nd issue of the same year, six articles evoked the history of the Review from its origins to 1990[5]. The anniversary was also an occasion to modernize the cover design, which had hardly changed since the 20's.

The cover of the special edition: 2000 ans d’histoire de l’Église 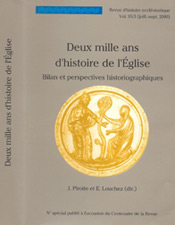 On June 8th, 2000, an agreement was signed between the two universities, UCL and KULeuven; it specifies the competencies of the various committees and names the personnel of the Review in Leuven and in Louvain-La-Neuve.

Three successive secretaries of the RHE: from L. to R.: the Prof. Cl. Soetens, R. Aubert and J.-P. Delville 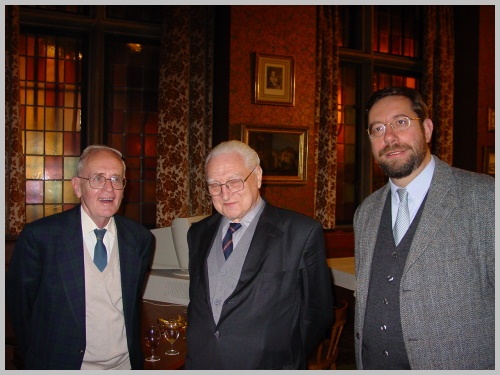 On the computerization level, since around 2000, most of the Review's contents have been transmitted electronically. And beginning in 2002, the bibliography is encoded into a database and then transmitted to the printer (Cultura in Wetteren) in digital format. In a few months, it will be possible to consult the RHE bibliography online on the website of the firm Brepols (Brepolis). Henceforth articles and reviews will arrive already in digital format; the remainder is encoded at Louvain-La-Neuve; the whole is reread, corrected, formatted and sent to the printer Cultura.

On December 13th, 2005, in the presence of the Rector of UCL, Bernard Coulie, and the vice-Rector of KUL, Filip Abraham, an agreement was signed in Leuven with the American company ProQuest for putting the entire contents of the RHE from 1900 to 2000 online. On that occasion, a celebration was organized for the appearance of issue 100.

In 2007, the RHE agreed to assume responsability for editing the Dictionnaire d'histoire et de géographie ecclésiastiques (published in Paris by Letouzey), ensured until the by Canon Roger Aubert. Professor Luc Courtois has been engaged for programming this work. Since 2009, the consultation of the online RHE Bibliography has been available on the Brepolis site, combining the bibliographic records from the last thirty years (1981-2010).

As of January 1st, 2010, the Review also records some structural changes. From now on, following the accession to the emeritus of Prof. Jan Roegiers (KUL), Prof. Jean-Pierre Delville (UCL) has become director of the RHE. And Prof Mathijs Lamberigts (KUL) has been named editorial secretary. An adjoint editorial secretary has been named: Prof Dries Vanysacker (KUL), who is already in charge of bibliography. Also, a thirteen-member international board was established. On 14 July 2013, Jean-Pierre Delville stepped down as director of the Revue when he was ordained as the 92th Bishop of Liège. M. Lamberigts took his place as director, while Jean-Marie Auwers has taken up the role of editorial secretary.
Since 1st October 2015, Professor Paul Bertrand (UCL) holds the role of editorial secretary and  Professor Jean-Marie Auwers that of treasurer.

And finally, since 2011, the most recent decade of the Journal (articles, reviews, and chronicles) was made available online via a subscription to the Brepols online website.

Some quantitative data to close this outline: in a little more than one century of existence (1900-2007), the RHE produced approximately 155,000 pages and provided more than 740,000 bibliographical references…

5. The full-length texts of the first five articles retracing the history of the review are provided above.